The leak of 11.5 million documents from Panama-based law firm Mossack Fonseca has focused unprecedented attention on the use of tax havens and trails of secret companies to conceal the beneficiaries of undeclared and illegally obtained money.

A newly released LexisNexis white paper, The Hidden World of Beneficial Ownership, is a timely response to these revelations. It explains what 'ultimate beneficial ownership' (UBO) is, why it's a problem, and what regulators, governments and international bodies have been doing to try to create a more transparent business environment. It highlights the challenge corporate due diligence teams face in uncovering the true identities of people who ultimately receive the proceeds of business deals and financial transactions involving money laundering, bribery, corruption and other criminal activities.

Minimising the risk of scandal

The white paper also also lists the measures that companies – especially those offering financial services – need to take to protect themselves from a lack of visibility in who they are ultimately doing business with. As the paper says, in the continuing absence of global standards of transparency, "financial institutions and businesses need to ensure that they comply with best practice to minimise the risk of being embroiled in corruption and scandal".

It is a risk that will only become greater as prosecutions stem from the Mossack Fonseca leak (and possibly other leaks inspired by it), putting pressure on regulators and investigators to address matters of UBO transparency with more urgency and energy.

Already the response of the five largest European Union economies (United Kingdom, France, Germany, Italy and Spain) has been to agree to share information on ownership of businesses and trusts, and they have called on all the other G20 nations to do the same.

The exact scale of the problem is, of course, unknown. But it is unquestionably massive and widespread.

When the OECD reviewed more than 400 bribery cases across 41 countries for a report in 2014, one in four were found to have involved illicit money channelled through shadowy secret companies. The World Bank has estimated that corrupt politicians used such companies to obscure their identities in 70 per cent of more than 200 cases of grand corruption. The New York Times reported in 2014 that estimates of undeclared offshore wealth accounted for at least 8% – more than US$7 trillion – of the world's personal financial wealth.

Opportunities to illicitly transfer or hide money through complex networks of companies deliberately created to mask its ultimate beneficiaries has been a central part of two of the most high-profile corruption scandals in recent years: alleged bribery among representatives of football's governing body, FIFA; and alleged corporate corruption at the international Brazilian petroleum company Petrobras.

Clearly, the size of a company or organisation, or its public brand profile, is no guarantee that its operations are free from corruption.

Businesses need to ensure they conduct thorough, ongoing due diligence procedures to minimize the risk of being an accessory to bribery, corruption or money laundering. This should be based not only on local legislation, but also on best practice – such as that contained in the Financial Action Task Force's recommendations, which are outlined in the LexisNexis white paper.

Financial institutions in particular need to ensure they carry out advanced due diligence when onboarding new customers. It is crucial to gain an in-depth understanding of companies and individuals that interact with an organization, including clients, suppliers, contractors and partners.

This level of due diligence encompasses a regularly updated focus on global watch lists of suspect organisations and politically exposed persons (PEPs), individual biographies and proactive monitoring of news outlets.

All these areas of vigilance and risk management are explained in some detail in the white paper. 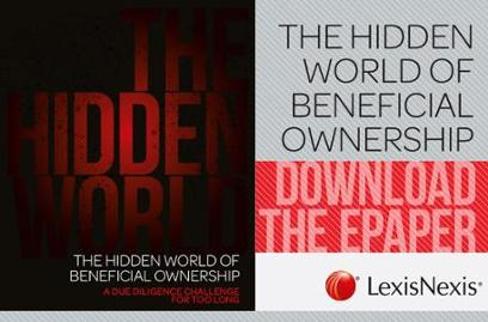