How long until public trust can be restored in the financial system?

The Serious Fraud Office (SFO) has charged ten individuals with conspiracy to defraud for their alleged part in the manipulation of the Euro Interbank Offered Rate (Euribor).

The 10 bankers – six employees of Deutsche Bank and four from Barclays – are the largest group of people to face prosecution in the ongoing investigation into the global rate rigging scandal to date.

The action is the first brought over manipulation of Euribor but is merely the latest in a series of probes which started out with investigations into rigging of Libor.  Barclays became the first bank to be charged in connection with the Libor scandal in July 2012 and the SFO joined the global investigation into rate rigging shortly afterwards.

In August, Tom Hayes, a 35-year-old former derivatives trader at Citigroup and UBS, was convicted of eight counts of conspiracy to defraud and sentenced to 14 years in jail at Southwark Crown Court.  Hayes's conviction was the first from the SFO's investigation into rate rigging.  He had worked at UBS until 2009 and then at Citigroup until 2010.

It is now almost seven years since the start of the financial crisis and a number of surveys have indicated that public trust in the banking industry has yet to recover.  The sector is trying to rebuild that trust with increased capital requirements to insure against the failure of more banks, a new spirit of openness at the Bank of England, and the ring fencing of high street banking from investment operations.

In the past seven years, 20 of the largest banks in the world have been fined more than £151 billion ($235 billion) for breaching financial regulations.  Those breaches included manipulating exchange and interest rate markets, as well as compensation for customers who were wrongly sold mortgages in the US and payment protection insurance in the UK.

Banks say they are working hard to rebuild the trust of customers and regulators, but trust may be hard to come by until the investigations into fraud on a massive scale are completed and the guilty brought to justice.

The top 10 fines in banking
Banks may be working hard to rebuild the trust of customers and regulators, but just how much trouble have they been in recently and what for? 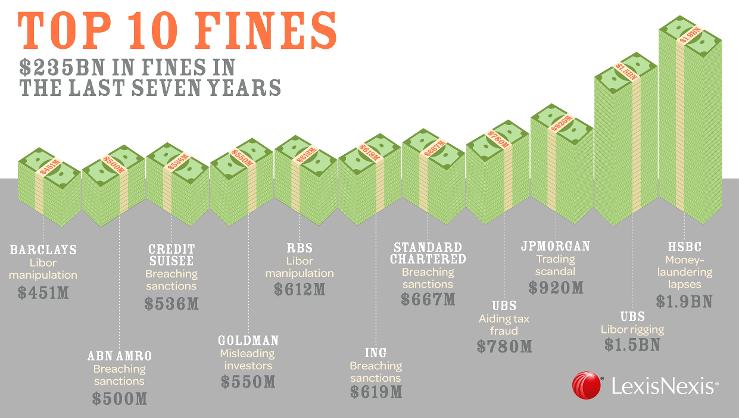