Not my cup of tea: Human trafficking in the tea industry

Tea is a thriving industry – next to water it is the most popular drink in the world – and more than three billion cups are made each day.  Tea consumption has grown by 60 per cent in the last 20 years and it is expected that this figure will continue to rise.   In 2014, 5.03 million metric tonnes of tea was produced globally, with 1.82 million exported from countries like China, India, Kenya, and Sri Lanka.

Second only to China, India is one of the biggest tea growing countries in the world, with more than one million people working full-time in the industry.  It is these workers who are targeted by human traffickers and often coerced into forced labour, domestic servitude and in some cases the sex industry.

The 2015 US State Department 'Trafficking in Persons' report highlighted the issue of human trafficking in West Bengal, drawing attention to the fact that it is children who are increasingly victims.
Low wages and poor living conditions faced by workers on tea plantations are key contributors to the problem.  Plantation workers in Assam are paid 115 rupees per day, which is significantly less than the 177 rupee minimum wage.  The issue is exacerbated by the fact that plantation owners have little incentive to increase wages, as India's Plantations Labour Act makes it legal for workers on tea plantations to be paid cash wages below the minimum wage due to 'non-cash benefits' such as housing, schools and sanitation.  Widespread poverty makes it easier for traffickers, who make false promises of better jobs, conditions and wages.

International and national laws exist to protect vulnerable plantation workers, but often have minimal effect on the ground.

The International Labour Organisation, a specialised agency of the United Nations, established the 1958 Plantations Convention, which aims to protect workers by setting standards for the provision of necessities such as adequate wages, housing, medical care, weekly rest and annual holidays.  Of the leading tea producing countries, Sri Lanka is the only one to have signed the convention, however this was subject to a series of exemptions that undermine the basic protections.

National laws, which have the dual intention of addressing the problem abroad and raising awareness at home, are also yet to have a significant impact.  Both US legislation, and the recently enacted UK Modern Slavery Act focus on supply chain transparency, and the Modern Slavery Act requires large companies to prepare a slavery and human trafficking statement each financial year.  While the legislation is now in place in the UK, it is too early to tell whether this will have the desired impact globally.

Moving towards the abolition of human trafficking
Consumer awareness is getting better.  Increasingly people are purchasing ethically produced and certified products, concerned about environmental impact and conditions for workers.  Between 2004 and 2009 the share of world tea exports certified by independent certification organisations rose by 2000 per cent.

A number of organisations, including Rainforest Alliance, UTZ Certified, and Fairtrade International set high standards for workers' living and working conditions and aim to enforce the ideas of the Plantations Convention and maintain basic rights for workers.  In 2014, the Rainforest Alliance, the largest organisation in terms of the volume of tea it certifies, accounted for 15.1% of global tea production.

The problem is still widespread, but progress is being made to protect those living and working on tea plantations from trafficking and forced labour.  By raising awareness globally to improve living and working conditions, workers will be better supported and less vulnerable to traffickers.

The UK Modern Slavery Act
In the battle to abolish human trafficking once and for all, businesses must now comply with the UK Modern Slavery Act. The new legislation is also having the desired effect, both locally and around the world.  Pete Talibart, Seyfarth Shaw UK Managing Partner and STOP THE TRAFFIK legal advisor, has commented that "Section 54 of the Modern Slavery Act is already being lauded as a historical ground breaker and has already started to influence other legal systems."
LexisNexis and STOP THE TRAFFIK have produced a detailed report investigating the link between the tea industry and human trafficking entitled 'Not my cup of tea'.  The report can be downloaded in full here.

In the meantime, here is a list of actions a business can take now to minimise the risk of human trafficking within its supply chain: 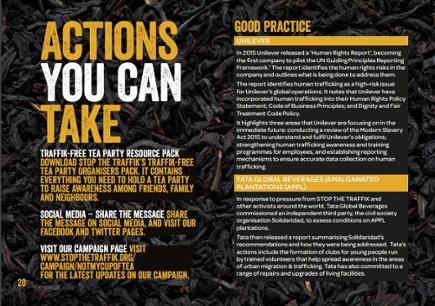 p.s. 3 ways you can apply this information right now to better understand your responsibility in Human Trafficking awareness