Reputational risks are greater than ever for brands associated with slavery

Amnesty International's recent report about child labour in supply chains demonstrated children as young as seven working in cobalt mines in the Democratic Republic of Congo.  Cobalt is used in mobile phone batteries and Amnesty accuses several global electronics brands of failing to do basic supply chain checks. This was widely reported in the media at the time but is not the only example of media interest in the issue of modern slavery.

An issue in the open

Analysis conducted with LexisNexis Newsdesk shows that in the traditional media, both online and in print, there are between 75,000 and 125,000 articles focusing on the issue of modern slavery each week.

The issue is also consistently discussed on social media.  Looking specifically at articles relating to modern slavery that have been posted by individuals, there are up to 25,000 articles published weekly.

A lifetime to build; a moment to destroy

The increased awareness of slavery that comes with the enforcement of the Modern Slavery Act, which took effect from 29 October 2015, means damage caused by a breach will extend beyond an injunction by the Secretary of State.  The issue of modern slavery is topical in both the traditional media, and social media, and a breach of the new legislation by a UK business will be big news, causing significant reputational damage to the brand and organisation.

Take the recent example of Nestlé. In November the company, which is one of the most recognisable household brand names, suffered adverse media reaction when it announced that it had found slavery in its supply chain in Thailand.

Nick Grono, Chief Executive of The Freedom Fund, an NGO that focusses on anti-human trafficking initiatives in Thailand, believes Nestlé's voluntary admission was a ground-breaking move, saying that "If you've got one of the biggest brands in the world proactively coming out and admitting that they have found slavery in their business operations, then it's potentially a huge game-changer and could lead to real and sustained change in how supply chains are managed."

Despite Nestlé making the decision to independently disclose that its customers had purchased products associated with slave labour, both traditional and social media reacted negatively.

LexisNexis Newsdesk analysis shows that across the combined media landscape, mentions of Nestlé in relation to slavery skyrocketed after the announcement, with 20 to 90 articles per week discussing slavery in the brand's supply chain.  Analysis of the coverage over time shows that although focus dips as expected, during slavery and human trafficking prevention month in January mentions of the brand and slavery again spiked.

No news is good news

Analysis of Nestlé's adverse media coverage related to slavery with LexisNexis Newsdesk demonstrates the negative sentiment generated by the announcement.  The sentiment chart shows that more than a third of the coverage was entirely negative, while only 2.5% was positive – this despite the company's own admission of failure.  Despite 'managing its message' in the most pro-active, transparent, and 'game-changing' way, Nestlé still faced an overwhelmingly negative response.

Nestlé's case shows that issues relating to human trafficking in supply chains will always garner an overwhelmingly negative response.  Failing to comprehensively address the new legislation and take action now will be damaging to corporate reputation.  It has never been more important for businesses to put the right tools in place that enable them to monitor suppliers, and manage exposure to risk.

It is often at the furthest reaches of a global supply chain that the risk of slavery is often greatest.  Businesses with an annual turnover of more than £36 million a year now have a legal duty under the Modern Slavery Act to provide an annual statement detailing the steps they have taken to ensure that the business, and its supply chains, are free from slavery and human trafficking.  For organisations with a financial year ending 31 March 2016, action needs to be taken now, as they will be the first companies required to publish a statement.

Failure to comply can lead to an injunction from the Secretary of State, as well as the reputational damage – bad publicity and public shaming – which will be significant. 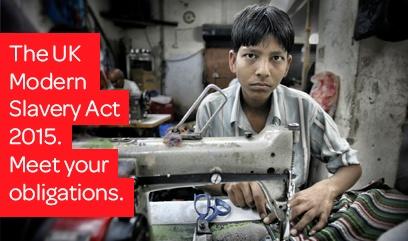