With the lifting of United Nations, United States and European Union nuclear proliferation-related sanctions on January 16, key sectors of the Iranian economy, including oil and gas, banking, insurance, auto manufacturing and infrastructure development, are once again open to global trade and investment. However, a series of heavily penalty-enforced sanctions remain, relating to Iranian support of terrorism and the government's human rights abuses.

Importance of Know Your Customer (KYC)

In particular, any company in the UK, Europe or Asia wanting to do a deal in Iran would be wise to determine if it is doing business with an entity linked to the Islamic Revolutionary Guard Corps (IRGC), which controls a considerable part of Iran's economy, both private and public, in one way or another. This is a controversial grey area subject to change.

In the US, lawmakers in both chambers of government have introduced bills calling for the entire IRGC to be designated as a foreign terrorist organisation and creating an IRGC watchlist. One of the proposed Acts would provide for more effective sanctions against IRGC officials, agents and affiliates to counter support for international terrorism and assistance to the Assad regime in Syria. How this would affect non-US subsidiaries of US companies is uncertain.

For example, hours after the nuclear sanctions were lifted, the US imposed sanctions on 11 entities and individuals, blocking their use of the US banking system, in response to Iran carrying out a test in October as part of its ballistic missile programme. As President Obama said amid the relationship-thawing of the January 16 "Implementation Day": differences remain and the US will "remain steadfast in opposing Iran's destabilising behaviour elsewhere".

Also subject to significant change is the business environment within Iran, where economic troubles including high inflation and unemployment are blamed on mismanagement and corruption as much as the effects of sanctions. If President Rouhani can't meet expectations in turning the $400 billion economy around, it will feed support for his hardline, less pro-Western political opponents.

On the corruption issue, Iran ranked 136/175 on Transparency International's Corruption Perceptions Index in 2014, and in 2015 it ranked first on the Basel Institute on Governance's Anti-Money Laundering Index in terms of risk rating for money laundering and terrorist finance.

Iran's population of 80 million is fevering to once again have access to a ready supply of imported goods, but obtaining import permits could sometimes require "additional payments". Companies in the exporting countries will need to be mindful of their own regulatory requirements, such as the UKBribery Act. Furthermore, navigating Iran's legal and regulatory regime has been described as "walking into a minefield".

The LexisNexis  ebook 'Sanctions Uncovered – Iran Special'  outlines some of the issues concerning  the potential lifting of sanctions in Iran and what this will mean for businesses that wish to trade in the country but still need to remain compliant with global trade restrictions. The ebook can be downloaded below. 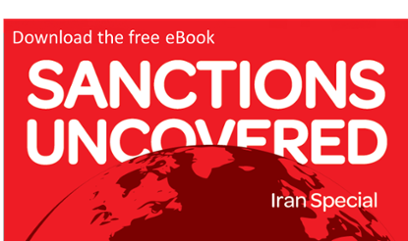