The European Championship football tournament is happening now in France and later in the summer the eyes of the world will be on the Olympic Games in Brazil. Major sports tournaments like the Olympics and the football World Cup are lucrative and engage large audiences. The governing body for world football, Fifa, made more than US$2 billion from the last World Cup, while a report for the London 2012 Olympics said a projected 3.6 billion people watched some of the Games on television.

So it is no surprise that companies see these events as opportunities to raise their profile through sponsorship, advertising, and impressing clients by offering access to the 'hottest ticket in town'. This also carries the risk of expenditure on hospitality being used by a company to bribe prospective clients, politically exposed persons or other individuals.

While the law in many countries allows companies to provide hospitality in order to provide more information on their services, or to promote good relations between company and client, it is usually illegal to use hospitality as a bribe.

Companies have been accused of going too far with their hospitality in previous sporting tournaments. A particularly prominent case involved BHP Billiton, the world's largest mining firm. They paid US$25 million to settle charges by US regulators over its provision of hospitality to government officials during the 2008 Olympics.

This fine, and the reputational damage that it caused the Australian company, shows the importance of companies walking on the right side of the line between hospitality and bribery.(Check out the Stamping Out Corruption in Sport infographic for more tips!)

Bribery in the bid process

The popularity of the World Cup and Olympics creates incentives for countries to influence the bidding process to host the tournaments, particularly rich 'outsider' nations such as those in the Middle East and Africa.

Legal charges were brought by the US Department of Justice against the leaders of Salt Lake City's bid to host the 2002 Winter Olympics, amid accusations of bribing members of the International Olympic Committee (IOC). Salt Lake City's bid team was acquitted but several members of the International Olympic Committee were expelled and new rules were implemented.

Bribery is not the only type of financial crime to afflict sport in recent years. Currently, the football authorities are addressing allegations of human rights abuses in the preparations for the Qatar World Cup in 2022.

Only last month, a report by Amnesty International said the stadiums under construction in Qatar are "being built on human rights abuses", including human trafficking.

Some of the biggest multinational firms sponsor the World Cup and they will be worried about having their logos plastered over a stadium built on apparently unethical labour practices. Coca Cola and Visa made statements expressing concern last year. This is not the sort of PR they hoped to get from their investment in the World Cup.

Sport has not escaped the fallout from the leak of the 'Panama files', a trove of 11.5 million documents from the Panama-based law firm Mossack Fonseca.

The leak has shed light on the ways in which companies set up offshore shell companies to hide their ownership of another company or asset, known as beneficial ownership. This is not illegal in itself, but can be used to hide ill-gotten money and property, to avoid paying taxes, and to conceal business deals and bribes.

The files revealed that officials from the Costa Rican National Olympic Committee requested Mossack Fonseca to give them control of a property which used to belong to the former head of a drug trafficking cartel in Mexico.

Sporting executives and stars were among those named in the files with offshore bank accounts and investments. This includes Lionel Messi, arguably the world's best footballer, whose family last week denied accusations that the footballer used an offshore shell company to avoid tax and launder money.

Despite progress against hidden beneficial ownership in individual countries, the extent of this leak demonstrates how important it is for nations to work together to develop a global framework around ownership transparency. There are already positive signs of this happening: the G20 committed to tougher principles on beneficial ownership in 2014 and the World Bank did the same last year.

Identifying beneficial ownership of a company is almost impossible, so compliance professionals should ask their prospective clients and third parties to disclose this information as a condition of being taken on as a client. They should also conduct their own research using sanctions watch lists, negative news stories and legal cases, and check the beneficial owner's corporate connections and political exposure.

So companies involved in sport, whether through sponsorship, hospitality or involvement in the bid team for a tournament, must work harder to avoid any association with financial crime or other types of corruption.

With the European Championships football tournament in France and the Olympics Games in Rio due to take place this summer, sport will dominate the headlines for the next few months. Fifa, the International Olympic Committee, and the companies which sponsor them, must focus on compliance and transparency to ensure these headlines are not for the wrong reasons.

Read more in the Stamping Out Corruption in Sport infographic. 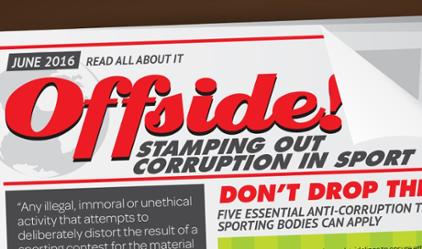