The rapid and precipitous decline of the once mighty mining group, Glencore, has once again highlighted the need for companies to monitor the media for signs of third party financial difficulties or wider structural and economic problems.

The commodities group is being forced to sell its wholly-owned Cobar copper mine in Australia and Lomas Bayas copper mine in Chile to weather the global slump in commodities prices caused, in part, by the slowdown in the Chinese economy.  Glencore is vulnerable because it is sitting on net debt of about $30 billion and is racing to cut it by a third.

The world's largest commodities trader has been in the news for months as the slump has gathered pace.  Warnings about profits, talk of takeovers by Glencore's competitors and rumours about approaches to sovereign wealth funds have all appeared in the media, apparently trailing the company's current dire state.

Research carried out by LexisNexis and State of Flux identified several potential indicators in the media which preceded major company collapses in recent years.  In all of the cases of company collapses analysed – including Kodak, Saab, SeaFrance, La Senza, American Airlines and Blacks Leisure – certain key phrases appeared in the media in increasing frequencies in the weeks and months leading up to company failure.  More than half of the companies sampled had multiple subject indicators appearing in the media including administration, profit warnings, corporate restructurings, redundancies, legal cases and divestitures.

Furthermore, out of all of the companies sampled in the research, more than 80 per cent had key phrase indicators in the media presaging financial failure up to six months before this actually happened.

Other indicators that fell outside the research included news about changes in the top layers of management at a company, a sudden switch in company auditors, news about dividend cuts, the sale of flagship products or property and cuts in pension provisions and options for top executives.

For Glencore, it is clear from the Nexis Analyser chart that some of these warning signs had indeed been apparent in the year leading up to its collapse.  The black line indicates Glencore's media profile over the year, while the green, blue, yellow and red indicate the frequency of references to administration, profit warnings, redundancies and divestitures.  The chart demonstrates the effectiveness of tracking media profile over time, showing the steady rise over the year of references to administration, as well as a dramatic increase in indications of profit warnings as early as June.

There are a number of options on how to use this information to provide a business with adequate warning of the collapse of either a customer or supplier. Companies may decide to monitor news coverage of their top 100 suppliers or customers or may monitor a much broader but shallower set of data.

Once the scale of the monitoring has been decided, an effective platform for this should be implemented before putting in place a process where new suppliers or customers are added to this platform before contracts are entered into.

The information gathered from such a monitoring strategy is only of any use if it is acted upon.  When red flags are raised, the company's wellbeing can be raised during regular meetings so that a genuine picture of the risk involved can be assessed.  Trading terms can then be amended, if necessary, additional credit insurance sought or the volume of business done with the supplier or customer can be reduced. 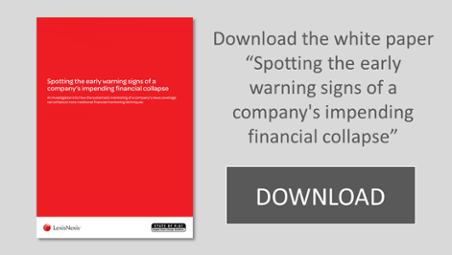